If you have a site using the AMP plugin in “Reader” (formerly “Classic”) mode – which is to say it uses some simple templates for rendering AMP pages – you should remove Glue for Yoast SEO & AMP:

– it is no longer necessary
– the code in glue-for-yoast-seo-amp/classes/frontend.php adds a duplicate inline CSS selector for

. This means the default colour scheme will override colours you set in Appearance > AMP.

Disabling the plugin fixes this.

People talk about Component First vs Utility First CSS frameworks – in my opinion the important word here is “first” – you should use your own best  judgement to combine the two techniques.

Does the HTML source code look a horrible with all those styles?

A bit when you very first see it.  But:

There are several ways Utility First can save time:

Can you still customise everything?

Who’s it good for:

Can you still use it with SASS?

There are two aspects to this, the CSS file size/download speed, and the speed the browser can process the quantity of selectors in it.

By default Tailwind will generate a very large CSS file with several thousand selectors.  But with a little optimisation (turning off unused colours and screen sizes) you can dramatically reduce this.   Also, the size is modest if served minified and gzipped.

Here’s a gulpfile.js, tested with gulp.js 4.0.0 and BrowserSync 2.26.3
It also uses the Tailwind CSS framework.

Here’s a good beginner’s guide to Gulp (although the syntax for task execution has changed in 4.0.0, you need to use gulp.series or gulp.parallel)

You’ll find this in Applications > Utilities.

It’s a quick/convenient way to get colors from webpages/PDFs etc. (albeit in RGB format) without needing a browser plugin. 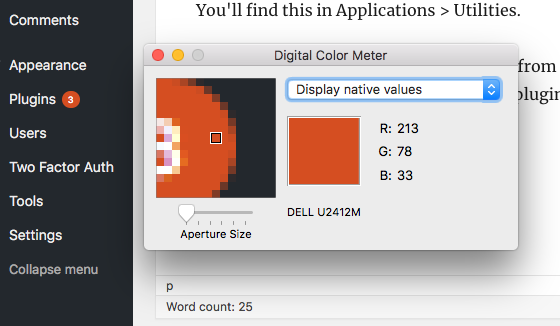 Due for public release next year (I’ve watched the full version and there are quite a few screenings left) this is a great film about the history of the World Wide Web, covering early browsers, table-based layout, the pros and cons of Flash, browser compatibility, the birth of web standards and css, responsive design, the web versus apps…

Paul Moore tweeted this demonstration of a rather devious phishing scam earlier, where someone has taken advantage of the fact a capital I can look virtually identical to a lower-case L in sans-serif fonts* (and therefore a hacker can register a domain with the incorrect spelling and provide a link that tricks people.). Letters can also be paired: an adjacent r and n make a convincing m if you’re not looking closely.

There is some protection in browsers against this nowadays: as soon as you press return (though not as you type or paste the URL in) the entire address is converted to lower case. In Firefox, the domain is highlighted in black while the rest – including, crucially, any subdomains that precede it – is greyed out, providing a further hint to the site’s real identity.

It’s common for phishing scams to use multiple subdomains to make you think you’re on the genuine site – e.g https://www.mytrustworthybank.com.somewhere.suspicio.us/login

You can go a step further.  The Firefox address bar can be customised via the userChrome.css CSS file –on a Mac you need to go to ~/Library/Application Support/Firefox/Profiles/[your profile]/chrome and create a copy based on userChrome-example.css

Add the following and restart:

This will make the font bigger and use the default serif font rather than a sans-serif one.  I and L are easy to distinguish and, for web developers, having a larger typeface probably helps, regardless of how good your eyesight is – we look at URLs more often than most people, after all. It ought to reduce the number of typos you make.

There are Add-ons that do similar things if you don’t want to write your own CSS.

GDS, the Government Digital Service, use a specially designed sans-serif font called New Transport based on Kinneir and Calvert’s work on British road signs.  Note the legibility clues, especially the curve at the bottom of the lower-case L.

Over time we’ve recognised text inputs are better when they’re bigger and made it easier for users to change the zoom level, but the address bar has remained resolutely small and in a font that’s not as legible as it might be. Perhaps we should fix that.

* It can happen the other way round too (in this case it was Sky’s fault for forcing a screenshot into the wrong aspect ratio, making a lower-case L slightly fatter and easily mistaken for a lower-case I, particular after it’s been bounced sent through the vision mixer and the presenter has to read it off a screen several metres away.)

Things outside the blog